The Great Neck Water Pollution Control District (GNWPCD) is a special commissioner-run district within the Town of North Hempstead.  The District is funded by taxpayers, as well as commercial, institutional and industrial users and has an elected Board of Commissioners.  The GNWPCD serves more than  25,000 residents living in the villages of Great Neck, Saddle Rock, Kensington, and those parts of Thomaston and Great Neck Plaza east of Middle Neck Road; as well as all unincorporated areas north of the railroad and a part of Manhasset.

The GNWPCD is comprised of a wastewater treatment plant that is designed for a daily flow of 5.3 million gallons a day (MGD).  Sewage is transported to the plant through 72 miles of sanitary sewers with the help of 10 sewage pump stations. 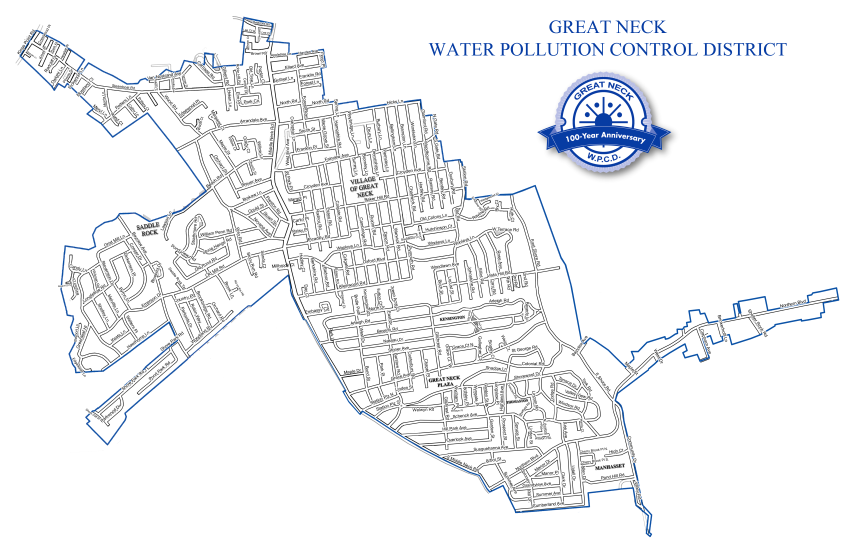 A Brief History of the District

Great Neck has had a sewerage treatment plant on East Shore Road since 1905.  In 1914 the Great Neck Water Pollution District was established when there was an increase in demand for wastewater treatment.  Initially,  the District dealt with the most basic kind of treatment – Primary.  The District’s original primary treatment consisted of settling tanks which removed heavy solids from the wastewater and a digester that biologically “digested” or reduced the amounts of solids removed by the settling tanks.  At that time the District could process one million gallons per day.

In the late 1920’s, another primary treatment plant was built on Bayview Avenue to maintain our continued protection of the environment and public health.  It was upgraded in the early 1940’s as the community continued to grow.  In 1960 the East Shore Road plant was completely rebuilt, and once again in 1967 the plant was upgraded to a 2.7 million gallon per day facility, with the Bayview Avenue plant became a pump station.

The next major upgrade was made in 1990 when the plant was upgraded to a tertiary treatment plant.  With the primary, secondary and tertiary treatment, the District  was expanded to process 3.8 million gallons of wastewater  per day.

In 2010 work began on a $60 Million plant upgrade to meet new stringent DEC mandated nitrogen requirements and to expand capacity to 5.3 MGD to enable consolidation ofthe Village of Great Neck’s collection system into the District. In early 2014 the upgrade and consolidation was completed.

In addition to the consolidation other improvements to the plant were put in place during the expansion. A Micro-turbine/Solar co-generation facility is now in place that utilizes the biogas byproduct from the treatment process to generate heat and electricity. A new ultraviolet disinfection process was installed to replace the use of the old chlorine disinfection system to destroy bacteria and other microorganisms. This rid the District of the financial burden of chemical disinfection and ended the discharge of chlorine into the bay.

The end result of the latest upgrade is that the District is discharging over 75 percent less nitrogen than in 2010. In addition, the new treatment process also quadrupled the purity of the plant’s effluent flow, making the District one of the most environmentally advanced wastewater treatment plants in New York State.